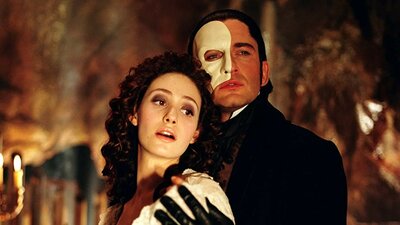 The Phantom of the Opera at The Mount Without

This February Bristol Film Festival looks forward to welcoming you to one of Bristol newest venues – the stunning Mount Without! Formerly a church dating from the 15th Century, this recently restored creative space on St. Michael’s Hill boasts a rich history. Enjoy a drink in the Crypt, before watching films in the Grade-II listed nave beneath a stunning stained-glass window.

The fairytale romance theme takes a decidedly darker turn with the 2004 film adaptation of Andrew Lloyd Webber’s legendary musical The Phantom Of The Opera. Inspired by Gaston Leroux’s classic novel, this visually striking tale of obsession and doomed love features all of the beloved songs from the stage show, as well as the Oscar-nominated original ‘Learn To Be Lonely’.

In 1880s Paris, aspiring young soprano Christine Daaé is secretly mentored by the mysterious Phantom of the Opera, a musical genius supposedly living in the vaults beneath the Paris Opera House. However, the Phantom is obsessed with Christine, and will stop at nothing to make her a star, and win her heart…

ABOUT THE LOCATION There has been a church on this site for over 900 years, with the original structure dating back to the Norman era; the unusual name comes from an era when it was outside the city’s walls.

After major renovation works in the late 18th Century, and again after damage from the Bristol Blitz, the church finally closed its doors and was deconsecrated in 1999. The building was the victim of an arson attack in 2016, but after years of restoration work it has now reopened as one of Bristol’s most unique and characterful new event spaces.