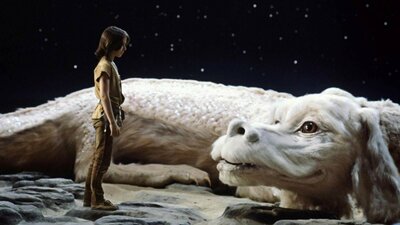 Bristol Film Festival is returning to Arnos Vale Cemetery this March for two nights of films that put a twist on fairytale fantasy! Join them after dark in Bristol’s very own necropolis – make your way through this historic graveyard to the beautiful Anglican Chapel and take your seat for the show.

The first film is the exceptionally 80s fan fave The Never-ending Story, which was the most expensive film ever made outside the USA and USSR upon release. Whether you wore your VHS out as a child or discovered it thanks to Stranger Things, there’s no denying the enduring cult status of this story-within-a-story, chronicling the struggle to save Fantasia from The Nothing within the pages of a magical book; while the extensive (and expensive!) special effects may have dated, the power of its imagination hasn’t faded at all.

Sheltering from bullies, Bastian is introduced to a mysterious book, which tells the story of the kingdom of Fantasia. With the Princess gravely ill, and a malevolent force called The Nothing encroaching on the kingdom, the young warrior Atreyu embarks on a journey to save his homeland from destruction.

The magnificently restored Anglican Chapel, located in the heart of Arnos Vale Cemetery, has become a firm favourite with our audiences. Enjoy a range of atmospheric films, from family-friendly comedies to chilling horror, in the dramatic surroundings of this Victorian Garden Cemetery.

No parking at Arnos Vale Cemetery unless disabled access is required. Nearby street parking is available.

Bike racks can be found by the East Lodge and by the café in the Spielman Centre.