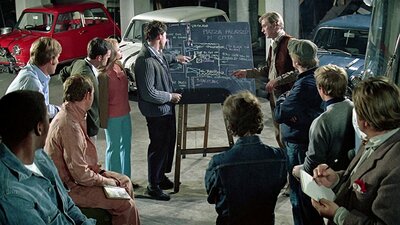 On Saturday 18th March BFF's “mini-fest” series returns to Bristol Improv Theatre with a day dedicated to the actor Michael Caine, who turns 90 a couple of days earlier!

Twice a year, BFF host a one-day event dedicated to the works of great directors and actors, showcasing a selection of highlights from their filmography. Stop by Bristol Improv Theatre’s bar before or after the film, then take your seats in this intimate venue for an introductory talk explaining the context and significance of the film.

The day continues with a screening of the quintessential comic caper The Italian Job. This beloved misadventure is one of Caine’s most iconic roles, and it’s become a cult symbol of British cinema - so much so that it was even honoured in the 2012 Olympic Opening Ceremony!

When crook Charlie Croker is released from prison, he instantly begins planning his next heist: an audacious gold bullion theft in Italy. He assembles a crew to help with the heist, but can they pull off the mission, and successfully avoid both the Italian police and the vengeful Mafia…?

The Bristol Improv Theatre is the UK’s first full-time dedicated improv theatre, hosting troupes from all over the UK and overseas, bringing world-class improv to Bristol. Through crowdfunding and the efforts of over 40 volunteers, the founders transformed this former-Victorian-schoolhouse-turned-working-mens-club-cum-live-music-venue into a purpose-built theatre space, with licensed bar, rehearsal rooms and office.