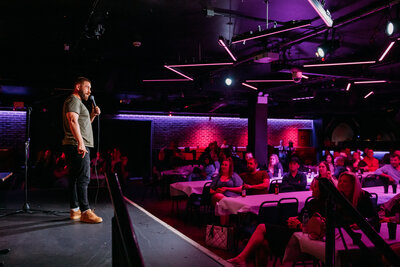 Just The Tonic truly are the kings of comedy. Their Birmingham comedy club regularly hosts some of the best up and coming comperes and headliners from the UK and further afield.

During this special show, you will be left in stitches as Reginald D. Hunter entertains you in this comedy extravaganza.

Reginald D. Hunter is an award winning comedian and one of the comedy industry’s best-known performers. His TV appearances have included Never Mind The Buzzcocks, QI and Have I Got News For You? and he regularly tours the UK and beyond, with his comedy enjoyed all over the world.

How to change dates
Change of plans? You can easily rebook the next available slot up to 30 days before your experience.
How to get a refund
Can't make it? We understand things happen! You can cancel and get a full refund up to 30 days before your experience.
Please note that this refund policy does not apply to gift bookings. You may reschedule your gift if outside the time period stated above. However, all gifts are non-refundable and expire exactly 1 year after the date of purchase.

Ask your question directly to Just the Tonic Comedy Club.