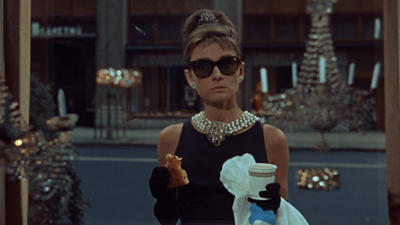 Breakfast at Tiffany's at RWA

Join Bristol Film Festival at the Royal West of England Academy (RWA) for a series of screenings celebrating the finest films to win Academy Awards. These unforgettable evenings include live music and a welcome drink before the film, as well as an opportunity to explore the galleries and view the RWA’s Photo Open Exhibition. After an introduction from Festival Director Owen Franklin, you can sit back and enjoy some of the highlights of the silver screen amidst the stunning setting of the RWA’s main gallery space.

BFF are delighted to be showing Breakfast At Tiffany’s this March. The seminal romantic comedy earned Audrey Hepburn her fourth Oscar nomination, and won two for its sublime score and original song ‘Moon River’, which Hepburn famously performs during the film. Discover, or rediscover, this timeless classic that still captivates audiences more than 60 years on.

Paul Varjak moves into a new apartment and meets his glamorous and eccentric neighbour, Holly Golightly. Paul dreams of being a writer; Holly is hoping to marry a rich man to ensure security and status. As the pair start to fall in love, will their ambitions get in the way of their relationship?

ABOUT THE LOCATION The RWA is Bristol’s oldest art gallery and the only Royal Academy of Art housed in its own purpose-built gallery in the UK. Each year we host gala screenings in this stunning venue, showing iconic Academy Award-winning films surrounded by the latest exhibition.

There is no visitor parking available at the venue - the closest available is on-street, pay-and-display parking in the surrounding area, as well as multi-storey car parks on Jacob’s Wells Road and Trenchard Street.