It all started on Instagram. Faye and Maddie had been following each other's art pages for a while (a like or a comment here and there) when they realised they'd both be living in Birmingham. A cheeky DM and a lunch later and they decided to start the UK's first dedicated nude Sip & Paint business together- Muse and Mimosas!

Both nude artists by trade, Faye and Maddie were interested in exploring and celebrating the female form through art- bumps and all! They combined their skills and shared passion for advocating for women's bodies to start hosting small paint-along events in Solihull.

Just over a year later and their sell-out Sip & Paint experiences are a safe place for people to relax, get arty, have a couple of drinks, meet new friends, and paint nudes!

We caught up with Faye and Maddie to find out more about their story: 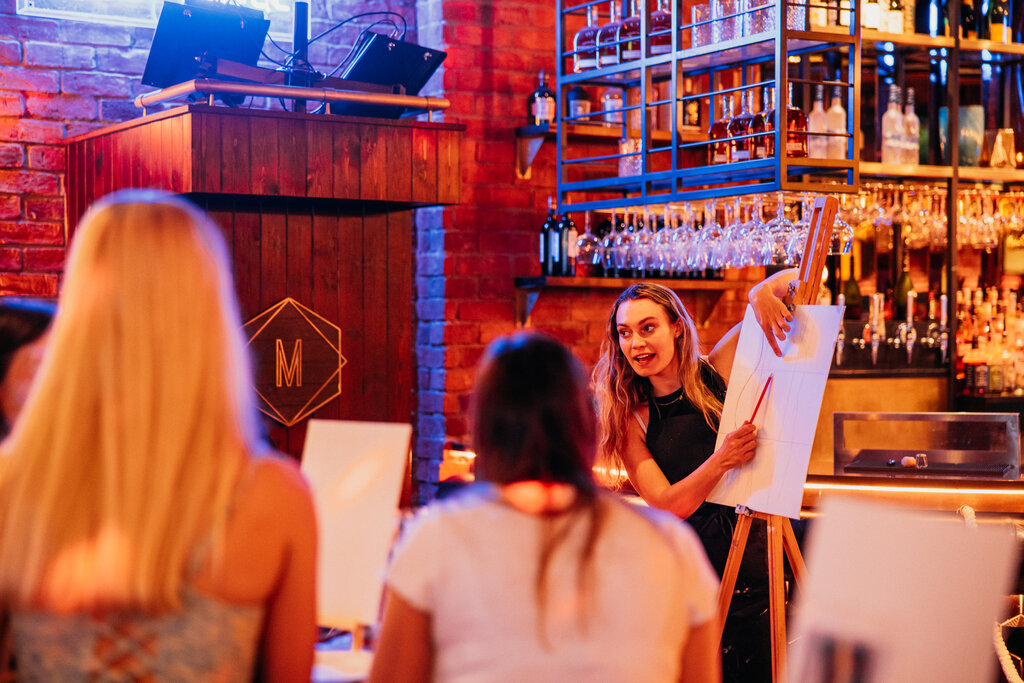 How Muse and Mimosas began:

Faye: We both had our own separate art accounts and we’re both nude artists by trade.

During lockdown both of us started nude art pages and we’d been connected on Instagram for a while. I was moving back to Birmingham and saw that Maddie tagged Birmingham as her location on Instagram.

Maddie was running virtual classes at the time and I had the opportunity to open a pop-up shop in Solihull for 3 months with a space at the back for art classes. I dropped Maddie a random DM, we’d spoken very briefly before, and asked her if she’d want to run some in-person classes from out of this shop. We went for lunch and got on really well and started running the classes about a month later.

We built a business together, became best friends at the same time and basically spent every day together for about a year.

At the beginning, we used to have to beg our friends to come to our art classes. I remember us panicking about having five people there and now we sell out two 30-person classes a month as a minimum! 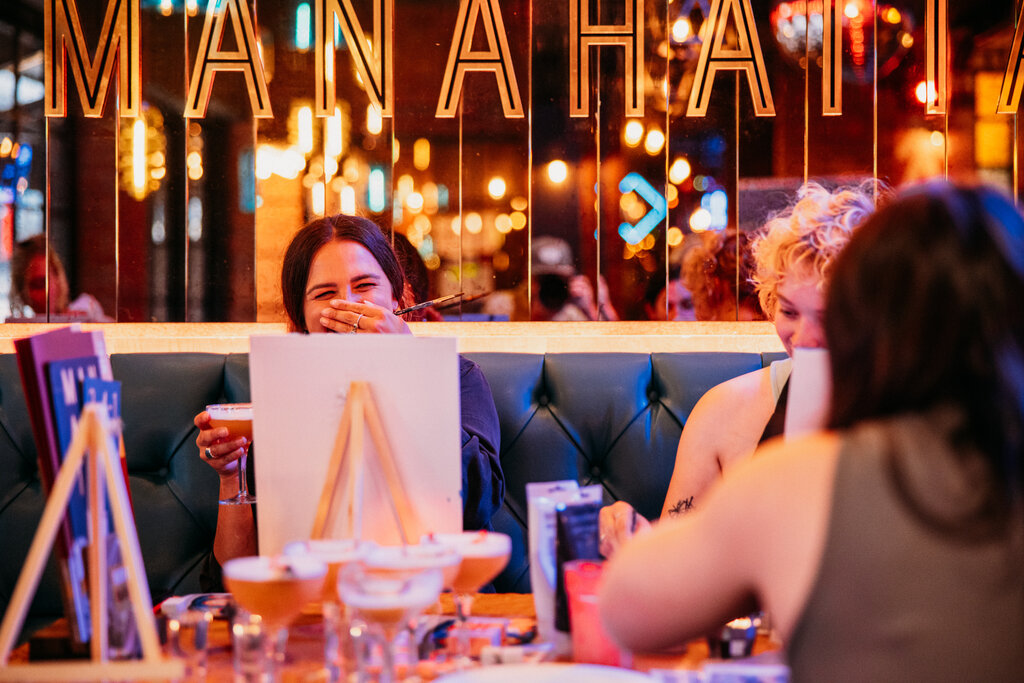 Maddie: It’s been getting very busy! We went from 17 private classes in a whole year to the last 3 weeks having 20 booked in so far!

I think what’s nice about what we do is that we have a lot of repeat customers. We’ve had people come 14 or 15 times.

Faye: It’s a really safe space, women feel comfortable coming by themselves and meeting people there.

Maddie: We’ve had a lot of friendships formed out of it as well, which is nice!

We’re the only nude Sip & Paint in the UK. There are a lot of sip & paints out there but I think the biggest thing for me and Faye is the nude artwork side of things.

Both of us started it during lockdown when a lot of people were struggling with their body image and we were all going through that bad period where we were just looking at ourselves in the mirror after binge eating a lot. I think that’s why, for us, we stuck with the nude side of art to celebrate bodies in all shapes and sizes.

We have a really personable relationship with our models now. They are friends or body positivity influencers, and they’ve all been amazing at creating that journey with Muse and Mimosas. We’ve worked with people that have been through physical trauma as well which has been really good to showcase. 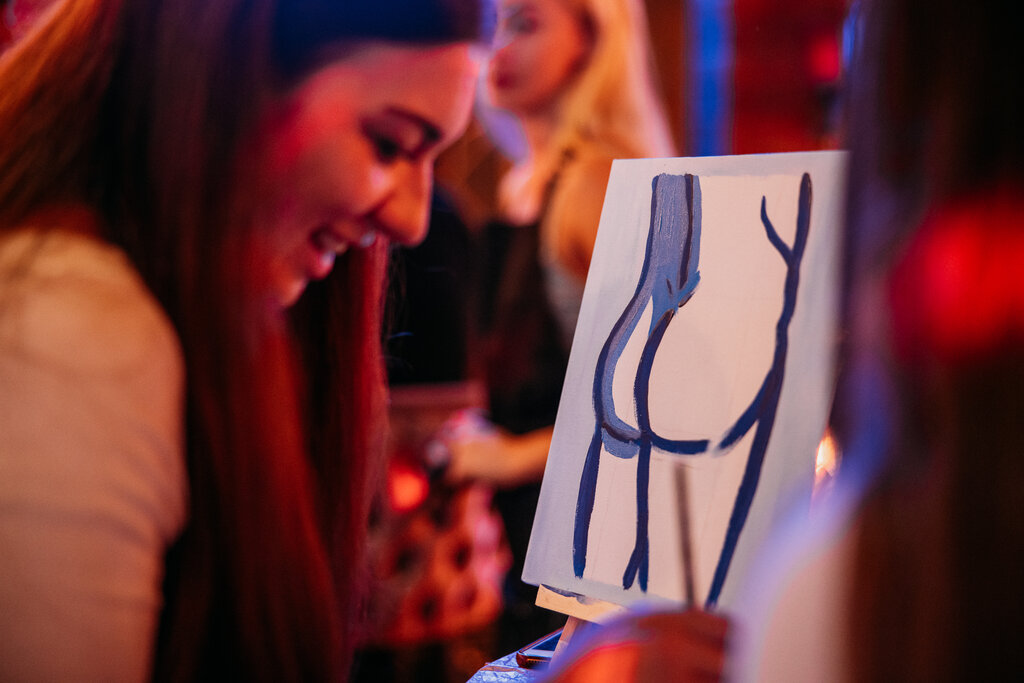 Not your average art class!

Maddie: If you look at an art class from a very stuffy side of things, we’re not like that at all. Anyone can come even if they’ve never picked up a paintbrush before in their life, and they just want to come for a night out and have a drink.

It’s more the sociable side- let’s just have a chat about bums etc. than it is about let’s create the most beautiful art. That’s what’s quite fun about it.

Faye: It doesn’t matter how many classes we do, there is still something so bizarre about saying to the group, “Okay, we’re going to draw the butt crack now.”

Maddie: In almost every single class we have someone saying “I’m so bad at art, this is going to be the worst piece you’re ever going to see!”

The really nice thing about our classes is that they're guided so they literally can’t go wrong and we’re constantly with them and giving them a hand with anything.

So we’ve never had someone that’s not said at the end: “Oh I actually really like it and I’ve done really well!”

Want to celebrate boobs, bums and tums? Join Faye and Maddie of Muse and Mimosas for nude Sip & Paint here! 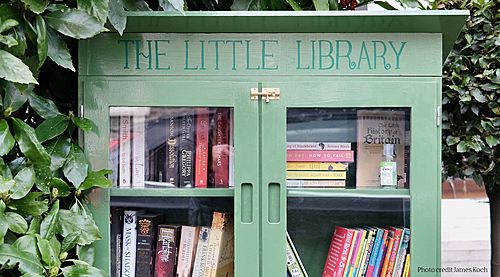 Things to do in Bristol for half term and beyond

This week we have a bumper guide of ideas to keep the whole family entertained this half term and beyond... 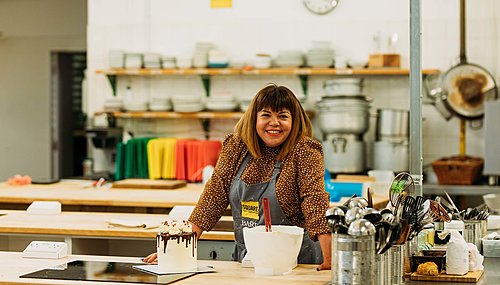 Top things to do in Bristol in July

There's lots of fun things to do in Bristol this July, especially with the 19th July restriction easing fast approach...