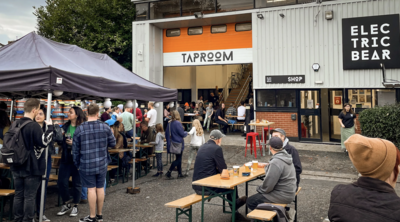 Please Note: All members of your party must be included in a single purchase.

Belly Laughs is coming to Bath!

Belly Laughs is a comedy festival with surprise pop-up comedy acts. It's a lucky dip of who you will get on the night, you might have a household-name comedian or you might have an up-and-coming local comic- and that's part of the fun!

Previous big names to have appeared include Jon Richardson, Abi Clarke, John Robins, Jayde Adams and Joe Wilkinson- but it really is luck of the draw!

Belly Laughs is launching in Bath for the first time! Buckle up for a month of live gigs set to leave you in stitches, in the best food and drink hotspots across the city, all in the name of supporting independent businesses and raising money for a good cause!

Electric Bear Brewing Co have been on the side of independence, craft and creativity since 2015, and now they're opening their doors to Belly Laughs for a truly unique night of top comedy comedy and local ales.

£10 from every ticket sale goes towards supporting Julian House. Julian House is a charity that supports vulnerable and at-risk individuals. These include adults and young people experiencing homelessness, escaping domestic abuse, adults with learning difficulties and people who need support after leaving prison.

Please arrive at 7pm, the comedy will kick off at 8pm.

How to change dates
Change of plans? You can easily rebook the next available slot up to 7 days before your experience.
How to get a refund
Can't make it? We understand things happen! You can cancel and get a full refund up to 7 days before your experience.
Please note that this refund policy does not apply to gift bookings. You may reschedule your gift if outside the time period stated above. However, all gifts are non-refundable and expire exactly 1 year after the date of purchase.